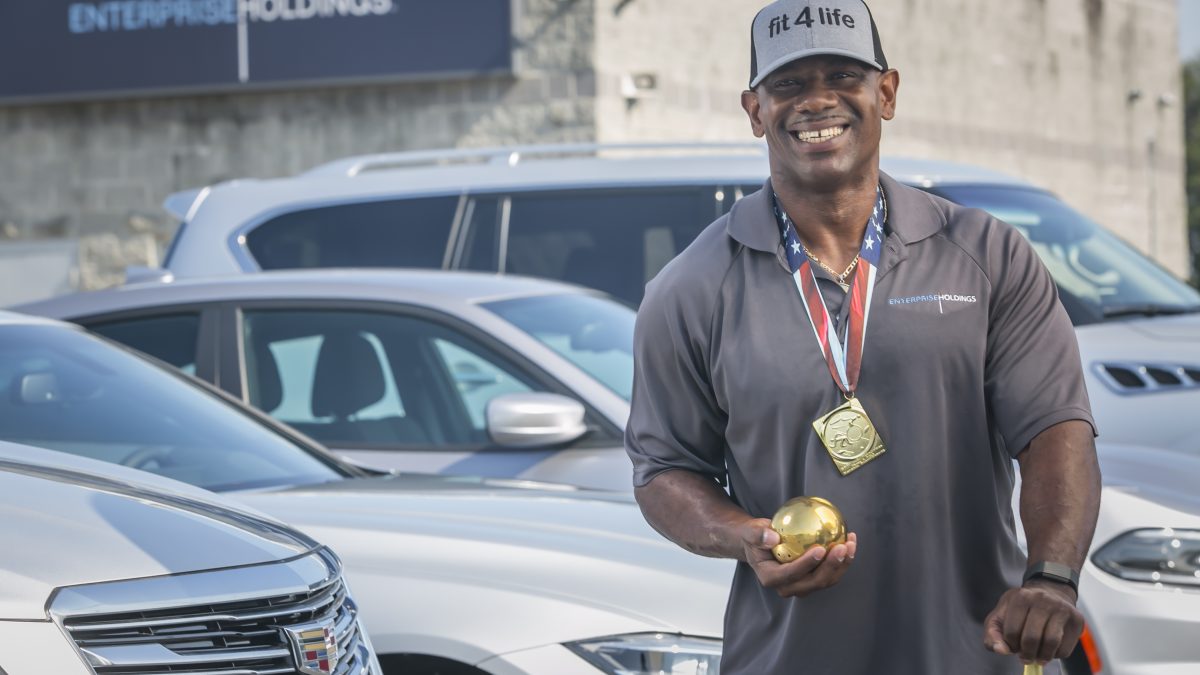 One-point-four meters. About four and half feet. It’s all that separates Rick E. from his cherished goal: To proudly wear “USA” on his chest as a member of the national team at the 2020 Paralympic Games in Tokyo, Japan.

Rick is well on his way today—fresh off the national championship he won in June as a shot-putter in the F34 classification. His best throw: 8.1 meters. Good enough for the 50-year-old to top many much-younger competitors, but still a little shy of the 9.5 meter distance needed to climb into the top ten rankings worldwide—and earn his trip to Tokyo.

No stranger to competition

You gotta like his chances, considering that 2017 was Rick’s first full season of competing in the event. “I’m still raw,” he says. “Still getting the technique down.” Even so, he’s no stranger to the medal platform in para athletic competitions, having won dozens of regional and national titles in power-lifting over the past five years.

At many of those events, he’d also enter the shot-put competition “just for fun.” When he applied to go to the Rio Games as a power-lifter in 2016, the coordinator noticed that his shot-put throws were among the best in the country. From that unlikely start, Rick’s new focus quickly took shape.

Rick now travels from his home in Savannah, Georgia, twice a month to train with his coach in North Carolina. In between, he lifts weights three days a week, and on other days throws the shot in his backyard. “I warm up with a 16-pounder, but in competition I throw a 4K—or nine-pounder,” Rick says. “I’m already strong from power-lifting, so it’s the technique that really matters now.”

Part of the technique involves a custom-built throwing chair. It’s an essential piece of equipment, whether Rick is training or competing—and he’s quick to acknowledge the assist he gets from being part of the Enterprise team. “I’m always renting small SUVs that can fit my chair in the back for all my travels,” he says. “I regularly use the employee discount!”

Far more important, though, is the support Rick receives from his colleagues at the Hilton Head International Airport branch in Savannah. He gushes about how his team accommodates his often-demanding schedule for out-of-town competitions. “I wouldn’t be able to do this without them,” he says. “They make it possible for me to keep earning a paycheck and still compete at a high level.”

It’s the sort of flexibility and openness he experiences with just about everyone he encounters at Enterprise. Rick uses a cane to walk, having suffered a spinal cord injury in a fall when he was in the military years ago. Initially paralyzed from the waist down, he worked hard to restore some movement to his lower body.

In joining Enterprise as a driver two years ago, Rick was delighted to find an employer willing to see possibility rather than disability. “They never set limits on me,” he says. “That’s why I love my company. They help me so much, and they don’t even know it. My whole team here—I couldn’t have done it without them!”