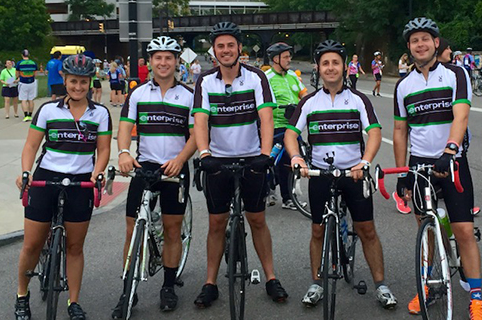 When a distinguished physician in Ohio decided there wasn’t enough funding for cancer research, he took matters into his own hands and decided to do something about it.

From one physician’s passion came the Pelotonia bike race. The fundraising event began in 2008 in Columbus, Ohio and is a three-day experience which includes cycling, entertainment and volunteerism. Since the event began, more than $130 million has been raised for life-saving cancer research efforts at The Ohio State University Comprehensive Cancer Center – Arthur G. James Cancer Hospital and Richard J. Solove Research Institute.

Pelotonia participants are well on their way to their ultimate goal: to end cancer.

And every summer, Enterprise is there to help.

The Central/Southwest Ohio group saddles up every year to support Pelotonia’s efforts. The group contributes vehicles, volunteers and fundraising to help make each year’s event a success.

The 2017 Pelotonia on Aug. 4-6 was no exception. As the Pelotonia’s official vehicle supplier, the group provided pickup trucks, minivans and commercial trucks. The vehicles performed a variety of tasks to help make the event run smoothly. The minivans, for example, were equipped with bike racks to transport some of the 8,022 riders to and from the weekend’s activities.

“Our group supports Pelotonia because it raises money for a great cause,” says Jessica M., Business Rental Consultant. “The Ohio State University has such a great impact on our community, and we’re all proud to help in this fight against cancer.”

Enterprise has supplied vehicles for the Pelotonia since 2009. Ohio employees sometimes take on the daunting challenge of participating as riders. Cyclists form teams, collect pledges and sign up for routes ranging from 25 to 180 miles. At the end of the weekend, though, tired riders feel good about bottom-line results. In 2016, for example, an Enterprise team raised more than $10,000. In addition, the Enterprise Foundation supported the cause with a grant.

“Unfortunately cancer hits too close to home for many employees – several have friends or family who have received treatment at the James Cancer Hospital. I’m proud of how our Group rallies around Pelotonia, and I look forward to supporting their efforts to end cancer for many years to come.”