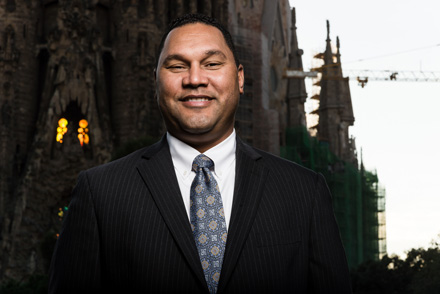 Take it from Area Manager Gerardo Gomez, one of nearly 11,000 individuals who earned promotions or took on new challenges at Enterprise Holdings last year:

While the average U.S. worker moves into a different job every 4.4 years, Gerardo has worked for Enterprise Holdings since 1998. The reason: “I chose Enterprise because of the opportunities — almost like changing careers without changing companies,” Gerardo says. “I wanted a company that would allow me to showcase my talent and let me grow.”

“I’ve always wanted to work in a Spanish-speaking environment,” says Gerardo, a native of the Dominican Republic. “I was in St. Louis attending a meeting at our Corporate Headquarters, and took the opportunity to ask the guest speaker about the growing opportunities in Europe. I seized the opportunity and everything worked out.”

Gerardo began his new job last December. He oversees 18 locations and almost 2,000 vehicles in and around Barcelona. The culture, the language and the typical workday (8 a.m.-8 p.m., with several hours off in the afternoon for siesta) have forced Gerardo to make some adjustments to his operations. But he enjoys meeting the challenges of his new job.

Gerardo sees his career growth as typical of what’s available to Enterprise employees who start in the Management Training program. “People tend to look for opportunities outside of the companies where they work when they want to do something different,” he says. “But here, there are so many opportunities within the company itself.”

Stories such as Gerardo’s abound. Mags Hester, for example, was promoted into positions that have prompted her to relocate four times since joining Enterprise Holdings in 1996 as a Management Trainee. In 2010, she moved from Canada to work in HR for Hawaii.

Mags’ commute to work is unique: She flies to visit Enterprise’s various locations on five of Hawaii’s major islands.

“No two days are alike,” she says. “Each week I am on the road — or I should say in the air — visiting a different island. It’s important to me that I have the opportunity to visit with our employees and give them face-to-face attention.”

For Mags, the ongoing potential for advancement within Enterprise Holdings has made it a great place to work.

“Our ability to move from one opportunity to another is one of the biggest highlights we offer,” Mags says. “When I speak to other professionals about our programs and relocation options, they are amazed. It’s one of the main reasons I joined the company and why I continue to sing its praises.”

Gerardo’s and Mags’ stories of opportunity are hardly unique. Almost all of Enterprise Holdings’ operational senior leadership team started out as Management Trainees.

How far can you take your career? That depends. How far do you want to GO?