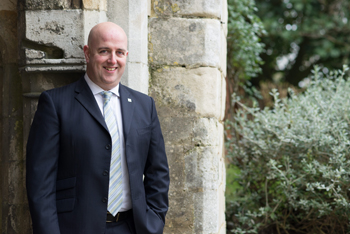 If there’s one thing Paul Smith finds appealing, it’s opportunity. Even so, he had a hard time believing everything he heard about the career paths that Enterprise offered when he first encountered the company at a university job fair in 1995.

“I actually turned Enterprise down when they offered me a position the first time,” recalls Paul, who in 2012 became Vice President and General Manager of the South England Group — the first English employee to reach the general manager level at Enterprise. “It was a very new company here, and I’d never heard of them. So I took a job with another business instead.”

Paul’s housemate did take a Management Trainee position at Enterprise, though. In the months that followed, the pair often compared notes about their employers.

“He kept telling me about the work he was doing and it sounded like a fun place, really,” Paul says. “So I jumped ship and quickly realized I should have gone with Enterprise sooner.”

Moving up the ladder

Less than a year later, Paul earned a promotion to Assistant Manager. In the late 1990s, Paul was the first Brit promoted to Area Manager in his group and among the first local hires to be named a City Manager. At each rung on the ladder, he applied a similar formula for success.

“It’s important to provide real leadership to the people who work alongside you,” Paul says. “You want to give them a vision, get everyone to buy into it and make sure they all understand the strategy for getting there.”

The ability to give effective feedback plays a critical role as well. “I’m quite direct in the way I communicate, and I think that it’s worked well for me,” he says.

“When British employees first encounter the American style of business, we have a tendency to think it’s all about high-fives and projecting a positive outlook,” Paul says. “That style works well for creating a team ethos, but you can’t misinterpret that outlook by trying to make everything positive, even when it isn’t.”

Paul believes Enterprise has continued to succeed in the United Kingdom because he and many of his long-time colleagues have grown adept at translating elements of the company culture on behalf of younger British employees.

“We’re able to take the best of the management style — the enthusiasm, the team-building and so on — and deliver the message in a way that makes sense to the recent university graduates at our branches,” he says.

Continued growth on the horizon

Even with all the growth that has occurred so far, Paul feels confident Enterprise will continue to provide great career opportunities for the current generation of Management Trainees.

“The opportunities are there if you ask a lot of questions, apply yourself and bring good ideas,” says Paul. “We’re very much an entrepreneurial company, even today. Try to figure out ways to do things better than your predecessor did, and before you know it, you’ll be knocking on the door of your first promotion. And it won’t be your last as long as you keep doing a great job of developing your employees and looking after your customers.”