Tips to finding an inspirational mentor 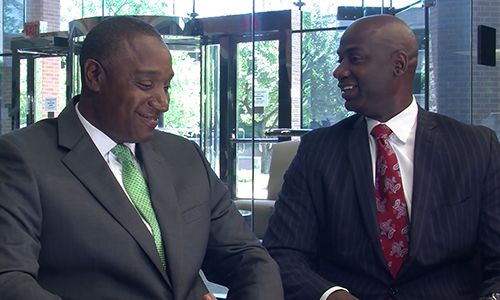 Align yourself with positive people.

It wasn’t long ago that James was a mentee himself, receiving inspiration, motivation and encouragement from Enterprise leaders.

In fact, he credits the relationships he built with mentors as a key factor to his now flourishing career.

James began his career in Washington, D.C. as a Management Trainee. He quickly made his way up the Rental ranks to Area Manager and then later pursued a Group Rental Manager position in Virginia. It was a conversation with his friend and mentor, John Wyatt, that convinced him to apply for an AVP of Rental position in St. Louis. Today, he is the Regional Vice President in Philadelphia.

John’s advice to James was a result of his own experience. Aside from always being open to taking on new opportunities, he is also an advocate for pursuing mentor relationships.

He’s immensely thankful his mentors helped him see the bigger picture: “My mentor told me to believe in myself, and at a time when I had a lot of doubt, he showed me I had great potential to succeed.”

John’s career progressed over the 10 years he spent in Southern California, leading to a Group Rental Manager position in Rhode Island. Three years later he became an AVP of Rental in St. Louis before landing in Montgomery, Alabama as a Regional Vice President. Eight years later he accepted his current position, GM in New Mexico.

Both James and John agree having a mentor is an invaluable aspect of helping to grow a career at Enterprise. Here are a few tips they offer when seeking out a mentor relationship:

-Have your boss in the game. James experienced the importance of developing a good boss-employee relationship and reaching out to them for help when faced with adversity. Often times they have faced a similar situation and can offer sage words of advice.

-Find someone that is mentor-worthy. John recommends finding someone who is a high-performer and in a position where you want to go. His advice: “You get what you ask for – so reach out!”

-Embrace candid coaching. John is grateful his mentors spoke to him honestly and objectively. Mentors are there to pull the best out of you, even if what they have to say is hard to hear.

-Help others. James says Enterprise has a great culture of paying it forward. So after you are well on your way to success, consider becoming a mentor to an employee who is just starting out.