Moose on the Loose

Selfie with a Soldier

Management Training Program: Enterprise through the eyes of Astrid P. 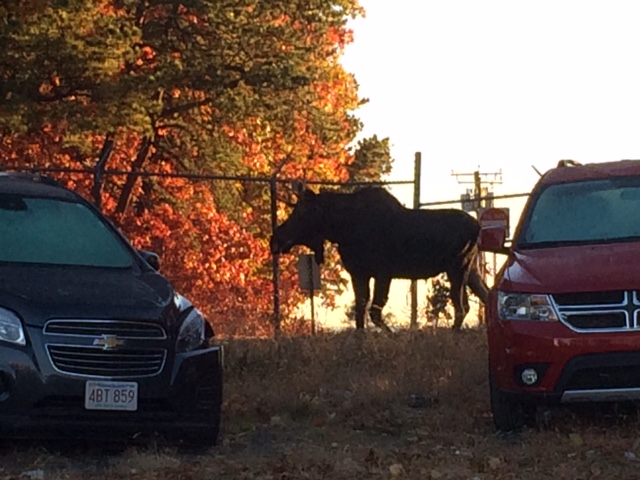 Kevin W., Vehicle Delivery Technician in Hartford, Connecticut, was going about his morning routine shuttling cars around the lot when a furry sight grabbed his attention in the rearview mirror.

A moose was walking through the parking lot.

And he wasn’t in the market for a compact sedan.

The animal – estimated at more than 1,000 pounds – somehow got himself trapped in the Enterprise Service Center lot, where vehicles are prepped for service.

While the Connecticut State Police, the Connecticut Department of Energy & Environmental Protection and a so-called “moose whisperer” busied themselves with herding Bullwinkle back to the woods, Kevin tasked himself with keeping his colleagues – many of them, understandably, wanting to sneak some selfies ­– out of the area.

With roughly 50 drivers making drop offs and pick-ups on any given day, the activity level could have easily spooked the massive mammal.

“He was clearly frustrated and spent the morning pacing the fence line trying to find a way out,” Kevin said of the moose. “My biggest priority was to make sure everyone stayed safe and kept at a distance.”

Ultimately, the four-hour ordeal had a happy ending: The moose made a successful exit back to the wild – and all the vehicles were left damage-free.

The CSP department posted about the encounter on their Facebook page. It includes a video of the moose making a run back to the woods once it cleared the lot.

The story gained attention locally and nationally, with People magazine and Yahoo giving the moose its 15-minutes of fame.