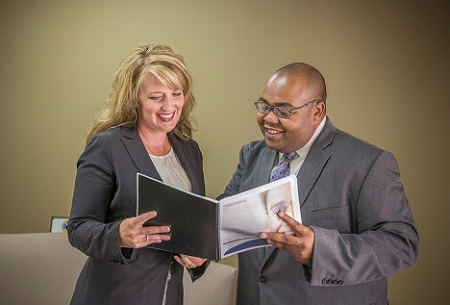 Derrick M. was a bright young accounting professional looking to start his career with a successful company that offered opportunities for career growth. He had just graduated from the University of Tennessee when he decided to join Enterprise’s East Tennessee Region office in Knoxville in 2012. A year later, his promising career hit a bump in the road.

“I found out that the path to success isn’t always easy, especially early in your career as you learn a new business and adapt to the culture of the company,” Derrick says. “I was struggling with what my next steps would be at Enterprise.”

He decided to volunteer for Enterprise Holdings’ Mentoring Program as a way to seek answers. Launched in 2006, approximately 8,000 employees across North America have participated in the mentoring program. Derrick credits his relationship withhis mentor, Operations Manager Xan A., with giving him the insights he needed to put his career back on track. He practiced what he learned from Xan, and others noticed. Just a few months after completing the program, Derrick earned a promotion to Accounting Supervisor.

Derrick’s experiences are typical of the Enterprise mentoring program. “We have found that properly mentored and coached employees tend to stay with the company longer and are more successful in their careers,” says Chance P., Human Resources Generalist Manager and the mentoring program manager for East Tennessee. “In Derrick’s case, I saw him transition to a supervisor in both his performance and the way he carried himself, thanks to the guidance he received from Xan.”

“I knew that I didn’t have that great of an image in the office at first,” Derrick says. “I was a hard worker, but I probably wasn’t the easiest person to talk to. When I started the mentoring program, I wanted to try for a promotion to supervisor, but I was told I wasn’t ready.”

Xan set out to prepare Derrick for a larger role in the company. “I wanted to help Derrick build stronger and more positive relationships within the office,” Xan says.

Xan, who has been a mentor for a number of employees, drew upon her rich experience with Enterprise. She started as aManagement Trainee in 1995 and advanced through Branch Manager and Area Manager positions to Operations Manager while balancing her career with being pregnant during many of those roles and raising four children.

Derrick says his pairing with Xan was a blessing. Their common background in administration, and having offices next door to each other, facilitated their relationship. They met formally once a month, but talked daily about each other’s experiences and about life in general at Enterprise.

“We worked on correcting things that were on my review from the previous year, such as better ways to present myself and better ways to handle certain situations,” Derrick says.

Their mentoring relationship paid off shortly after Derrick completed the program in the summer of 2014. “My boss came to me, instead of me going to her, asking me if I was interested in a supervisor position,” Derrick says. “As excited as I am about getting the promotion, the best part of the mentoring program is my relationship with Xan.”

Although Derrick and Xan acknowledge that their personalities are polar opposites — “I’m quiet and Derrick is very outgoing,” Xan says — their relationship has been mutually beneficial.

The mentoring program benefits Enterprise, as well. “When an experienced employee like Xan teaches what they know to a newer employee like Derrick, the process builds future leaders,” Chance says. “That’s what keeps our company alive and relevant: its employees.