Giving from the Heart

Leaving a legacy (and a tie) in Brooklyn 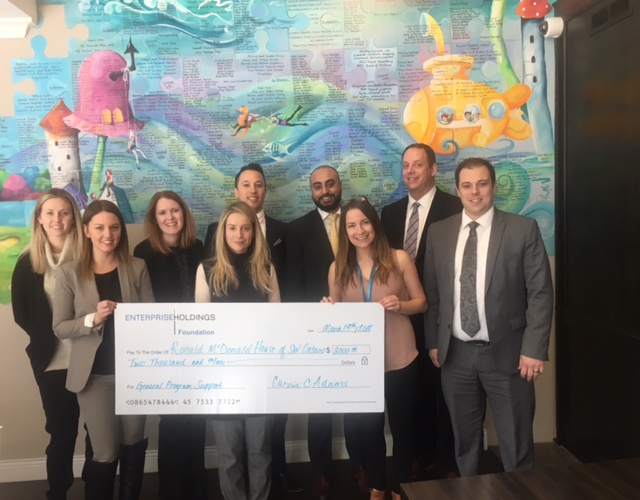 Carrie A. knows what it’s like to spend more time inside the walls of a hospital than out.

Her youngest daughter, Avery, who was born in 2011, spent most of her life — all 10 precious months of it — fighting to survive at the University of Michigan’s Children’s Hospital.

“No one ever anticipates needing to be at a hospital for months-on-end,” says Carrie, Group HR Manager in the Southwestern Ontario group. “That’s why it’s important for me to give back to organizations like the Ronald McDonald House – an option for my family and for many of our friends experiencing challenging times.”

After relocating to Southwestern Ontario several years later, Carrie had the opportunity to lead the Group’s Enterprise Holdings Foundation grant application process in support of the Ronald McDonald House at London Health Sciences Centre in Ontario. She enthusiastically jumped at the chance to give back in her daughter’s memory.

“I’m incredibly grateful for the Ronald McDonald House and their work to keep families with sick children together,” Carrie says. “During such an emotionally tough time, they offer meals, a variety of support services and a place where families can pretend to be a normal and healthy. The connections we made with everyone at the hospital who utilized their services is what makes the organization so near and dear to me.”

For Carrie, learning that her newborn daughter was more ill than doctors anticipated was heartbreaking news to say the least.   During prenatal ultrasounds Carrie found out Avery would enter the world with a heart condition — an ailment doctors planned to address a few months down the road after she started gaining weight. But once she was born, the team discovered Avery’s heart defect was part of a larger problem called VACTERL association — a rare disorder affecting multiple systems in the body.

“We had prepared ourselves throughout the pregnancy for how we’d handle Avery’s heart condition,” Carrie recalls. “We thought we’d take her home from the hospital, wait a few months and then schedule the procedure to repair her heart. Unfortunately, the new diagnosis made Avery’s prognosis more challenging. From the outside, Avery appeared perfectly healthy,” she explains. “But on the inside, her tiny body was struggling to survive. She had numerous procedures to fix several defects, but sadly, she couldn’t sustain any more surgeries to overcome her heart issues.”

From day one, Carrie, her husband, Carl, and their older daughter, Emily, knew any time they spent with Avery was a gift. Six years later, her presence is still around them. “We try to give back to the community in Avery’s name in as many ways as we can,” says Carrie. “The fact that the Enterprise Holdings Foundation makes funds available for nonprofit organizations is a true testament to the company’s commitment to its employees and the communities where we live and work.””

In addition to applying for and receiving a grant from the Foundation for the Ronald McDonald House in Ontario, Enterprise helped Carrie donate directly to one of the medical teams who greatly impacted her family. Shortly after Avery’s passing, Carrie and the Michigan group donated funds to the University of Michigan’s Children’s Hospital as part of the Group’s Jack Taylor Founding Values Award win.

“Those funds were earmarked to Avery’s hospice team so they could start a coaching and mentoring program for parents experiencing the loss of a child,” Carrie explains. “As someone who could have benefited from that offering, it felt amazing to help get the program off the ground for other parents facing such hardship.”

“I’m so thankful Enterprise gives employees the opportunity to make a difference,” she adds. “It means a lot to me that I’m helping others facing similar situations, and I know it wouldn’t be possible without the generosity of the Foundation.”