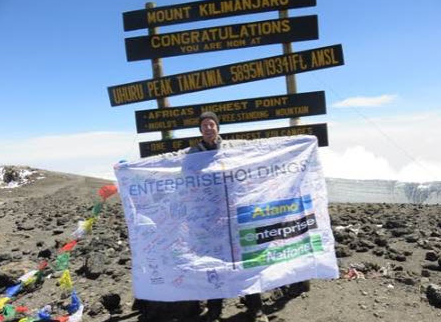 Warm sun shines on your face. You turn to see a giraffe munching on the leaves of a nearby tree. Zebras graze in the distance. It might be any summer day at your local zoo, but it’s not. It’s January, and you are in Africa to climb a mountain.

“I had been hiking locally for a couple of years when a friend of mine suggested that we climb Mount Kilimanjaro,” says Regional Rental Manager Mark B. “We took a year to plan and prepare.”

Mount Kilimanjaro is a dormant volcanic mountain in Tanzania, Africa. It is the tallest free-standing mountain in the world at 19,341 feet. During a climb, hikers pass through five climate zones from equatorial heat to arctic ice and snow at the peak.

“Climbing Mount Kilimanjaro is an attainable goal for anyone, because there are no mountaineering skills necessary,” says Mark. “It takes focus, preparation, a decent pair of shoes, appropriate clothing and reaching a certain physical fitness level, but anyone can do it. It is every man’s mountain.”

However, sometimes even people in good shape don’t make it because they have not prepared for the high altitude. “I trained by increasing my personal workouts and wearing a 20 pound weight vest and an elevation training mask while walking on the treadmill,” says Mark. The mask simulates a high altitude environment by restricting airflow.

It took seven days to climb the mountain and two days to come back down, and it was uncomfortable.

“My first time sleeping in a tent was my first night in Africa,” says Mark. “It was difficult sleeping at an angle on rocks with only a sleeping bag and thin pad. It was hot during the day and cold enough at night that ice would form in the tent.”

“The best part of the trip was the realization that I had accomplished this huge goal,” says Mark. “When we reached the top, people hugged and cried.”

It’s a tradition for people to bring a flag for the photo opportunity at the top. “I took an Enterprise flag to share the accomplishment with my team,” says Mark. “I had been in my position for only six months at the time, so inviting employees to come by my office and sign the flag was a great way to get to know them.”

“It was really exciting to ‘take’ 100 of my employees to the summit with me,” says Mark. The Enterprise flag is now framed and hangs in the administrative offices at the Los Angeles airport.

“Working at Enterprise for 22 years has taught me how to react to challenges in a calm way,” says Mark. “It really helped me to handle the adverse conditions of the climb with a positive attitude. There were so many annoying little things and small challenges, but the overall experience overshadowed all of that.”

“People ask me what was most fun about the trip, and I tell them, ‘Nothing.’ It’s not supposed to be fun. It is difficult and uncomfortable. It’s about accomplishment and pride of completing something challenging, which I could not have done without the support of my Enterprise team.”