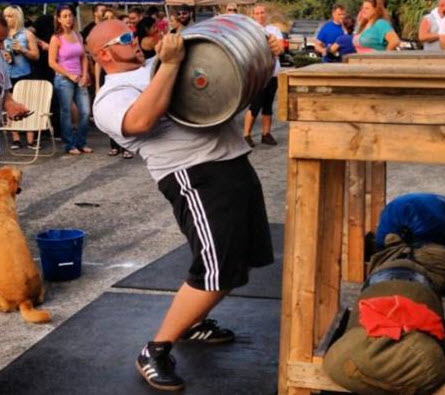 Mirror, mirror on the wall, who’s the strongest employee of them all?

In Fort Myers, Florida, all answers point to Zack A. — a 24-year-old Maintenance Technician who has made a name for himself by excelling in Strongman Classic competitions in his home state for the past three years.

Whether it involves pulling a 60-foot coach bus uphill, lifting a 550-pound atlas stone onto a podium or raising a weighted log above his head, Zack keeps his eyes on the prize.

“I was overweight as a child when my aunt first got me interested in body building,” says Zack. “I spent the summer of 2001 with her when she lived at the Marine air station base in El Toro, California. She had won Miss California earlier that year, so she always had been into fitness. Weight lifting just became something we did together.”

After lettering in high school lacrosse and participating in powerlifting contests, Zack first entered the Strongman circuit in 2012 on a whim.

“A gym buddy of mine had been into heavy weight lifting and asked if I wanted to help him prepare for a Strongman competition,” Zack says. “I helped him train and at the last minute, decided to enter the competition, too. I ended up taking first place in the novice division of that challenge and have trained for Strongmans ever since.”

The events — while modeled after Olympic-style weight lifts — are anything but traditional. Competitors might flip giant tires, toss kegs or perform hundreds of pounds of deadlifts.

“I know it seems odd, but mastering an event has nothing to do with brute strength — it’s all about form. We use apparatuses three times the diameter of a standard weightlifting bar, so getting the right grip is everything. That’s why every time I tug a three-inch thick rope in a truck pull, I do it a specific way,” Zack says of the event in which he’s known for doing well. “After that, it’s literally all uphill. It takes a lot to get four or five tons rolling up a slight incline via a harness on your back, but once the wheels start turning, it’s all momentum.”

When he is only weeks away from an event, Zack focuses on preparation. Fortunately for him, the nature of his job assists with some of that.

“The most helpful part of my job is that I work outside in the heat,” Zack says about his role of preparing rental vehicles for their transition to Enterprise Car Sales. “In Florida in the summer, we see 100-degree days quite often. Working outside helps me remember to keep my body hydrated. Because I often get overheated in competitions, spending time outdoors beforehand gets me accustomed to the heat, which helps my performance.”

In addition to hitting the gym a few times a week — sometimes for four-hour workouts —Zack has been known to turn work-related challenges into spur-of-the-moment training opportunities.

“One time, I lifted the front end of a car to help a co-worker secure a jack,” he says. “It doesn’t happen often, but in desperate times, brute strength does come in handy.”

Aside from taking part in competitions, Zack seeks ways to give back. Inspired by a friend who earned the 2013 title of American’s Strongest Man shortly before passing away, Zack wants to organize a charitable event for early 2015.

“My plan is to pull a fire truck, and ask companies and organizations to donate money to St. Jude’s [Cancer Research] for every foot I pull up to 60 feet,” he explains. “When it comes to athletics, giving back is so important, and I’m more than happy to do my part.”