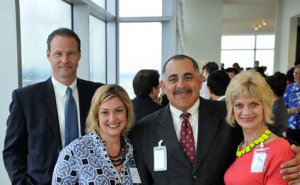 When Group Relations Manager Fred A. got a call from the Los Angeles mayor eight years ago, he had no idea the group he would convene would later serve as the foundation for a significant leadership group — let alone one he would help create.

“The mayor was working on a local initiative and asked if I could gather a group of folks together who might be interested in funding it,” says Fred, who has managed community relations, government relations and supplier diversity in Southern California for more than a decade.

“I reached out to three of my counterparts who serve in similar roles as myself to see how we could help,” he says. “The four of us put together a contact list of representatives from companies and organizations in Los Angeles that we thought could make a difference.”

After the group gathered together, the initiative took off and left Fred with an idea – to continue using that contact list to benefit the educational, environmental, philanthropic and social responsibility platforms in Southern California.

It was that idea that sparked the concept for LA Community Leaders.

In a snapshot, LA Community Leaders helps connect socially responsible businesses that are looking to make an impact through corporate citizenship. The networking group provides a unique forum for communication, peer learning and collaboration among members — all of whom are responsible for their employer’s corporate social responsibility initiatives in the Los Angeles area.

“The collective power of the group helps to further local projects and nonprofit causes,” says Fred. “For instance, in my role at Enterprise Holdings, I don’t have the resources or capability to have a huge impact on education here. But if I join forces with my counterparts from other companies, we’ll have a larger financial backing and together will be able to make a bigger difference.”

Since Fred founded LA Community Leaders in 2007, the organization has grown substantially. It began with about 20 members who represented eight companies and today includes more than 120 members who manage corporate giving programs at more than 70 companies in the Los Angeles area.

With a passion for his hometown, Fred says his organization is here for the long run. “We’re strengthening our community to empower it. Great things happen when we work together, and that’s how the city benefits from our rewards.”