Called to duty: Activating for Irma 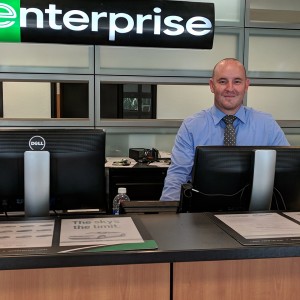 Two days before Management Assistant Scott T. planned to evacuate his Fort Myers, Florida, home ahead of Hurricane Irma, he got a call that changed his plans.

His National Guard unit had been called to duty.

Within hours, Scott shifted roles from running the Exotic Car Collection branch in downtown Naples to that of a National Guard officer working a state of emergency.

“My unit had been activated, so instead of evacuating to Georgia with my wife, I had 48 hours to report to Tampa with the National Guard,” says Scott, a First Lieutenant with the 53rd Infantry Brigade Combat Team. “With the state of emergency declared, we knew we’d have to act fast.”

“We had about 100 soldiers manning 20 shelters in the area and even more coordinating efforts there with local authorities,” he says. “For nine days I made sure everyone — my unit, our soldiers, emergency personnel and local authorities — were all on the same page for various tasks at hand.”

“There certainly were tense moments during the storm, but all in all, we didn’t have any major catastrophes,” Scott adds.

In the midst of Scott’s service, his wife, Sydney, discovered the home they purchased in Fort Myers just two months prior to Irma was filling with water and downed trees were wreaking havoc across their property.

It’s been a whirlwind few months for the couple. Scott returned home in April from a 14-month deployment in Djibouti, Africa where he provided local security. Just two weeks before he deployed, he and Sydney got married.

“When I got home all we did was search for the perfect house,” he says. “It’s a little stressful that two months into home ownership we’re already ripping out four feet of drywall from the floor up in every room, but then again, at least our house is fixable.”

Eye on the prize

Fortunately for Scott, picking up where he left off with his Enterprise career was smooth and simple. “Everyone on my team at Enterprise is, and has been from day one, supportive of my military involvement,” Scott explains. “They’ve always been great and willing to work with me around my trainings, deployment and activations.”

Scott cites the company’s support of the military as one of the factors that drew him to the Management Training program in 2014. And he sees overlap between his two roles, especially during his Irma deployment.

“I had to manage not only my company’s vehicles, but also the battalion reserve vehicles,” he says. “This meant ensuring vehicle maintenance was complete and working to cycle them through service checks so we didn’t have all vehicles going into service at the same time. There are times in the military where they teach you backwards planning, which is exactly what you need to know when dealing with appointments to ensure the car is ready to go.”

“It’s nice to be part of a company where you’re valued as a team player, but still have the autonomy and flexibility to do what you can,” explains Scott. “When I signed on with the National Guard I wanted a new perspective on life, and that’s exactly what I’m thrilled to be getting.”