A Culture of Military Support and Recognition 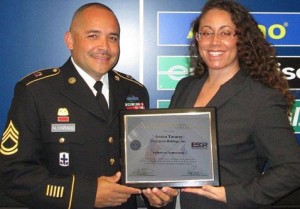 Carlos joined the Marines in June of 1990 and was deployed three times – twice to Iraq and once to Afghanistan.

Nearly five years after being discharged, Carlos’s patriotic spirit led him to join the National Guard in 2003.

But pursuing a military career and courageously serving our country is only half of Carlos’s story.  Between deployments, Carlos also serves customers as an Enterprise Car Sales Certification Coordinator in Fort Myers, Florida.

“I notice a lot of similarities between Enterprise and the military,” says Carlos. “Everything is done for a reason and with a purpose. Everyone is focused on getting the job done but there is also a tremendous focus on providing opportunities for growth and career development. It’s a great company and I’m proud to be a part of it.”

Balancing his military commitments, including a promotion to Sergeant First Class, with his Enterprise responsibilities required flexibility and support from Carlos’s team and supervisor.

“My management team and especially my group manager Jessica T. have always supported me,” says Carlos. “They have allowed me the freedom and flexibility to not only fulfill my military obligations but also balance my career here. I’m so lucky to be around people who believe in me and all that I can accomplish both inside and outside of work.”

It was the flexibility, growth and career opportunities that led Carlos to nominate Jessica for the Patriot Award. The award is presented by the Employer Support of the Guard and Reserve, a Department of the Defense office, to supervisors who support Citizen Warriors through a variety of measures including flexible schedules and granting leaves of absence if needed.

Carlos was thrilled when he received the news that Jessica had won and presented the award along with his team in December.

“To know that he took the time to nominate me outside of all his work and military obligations was amazing,” said Jessica. “I think this recognition speaks volumes about our organization.  Our leaders have fostered a culture of military support alongside career growth and it’s a privilege to support those efforts.”

A Call to Serve

Carlos recently embarked on his fourth deployment where he is serving as the lead translator for training Central and South American forces as they work to strengthen their borders.

“The team is going to miss Carlos,” said Jessica.  “He brings great energy to the Car Sales team and is a true leader.  Coming from a family with a  military background, I understand the dedication these men and women give to our country so any way I can continue to step up and help Carlos, I will.”

Military Recognition Through the Years

Enterprise’s rich and distinctive heritage stems from its founder, Jack Taylor, and the lessons he learned while serving aboard the USS Enterprise as a decorated Naval pilot during World War II – lessons such as the values of integrity, hard work, team spirit and simply doing the right thing.  Enterprise remains committed to maintaining these values and continues to support those who serve their countries. This dedication has earned the company some prestigious recognition and awards, including:

-Freedom Award Nominee by the ESGR: Enterprise was one of only two Missouri companies to receive the first Extraordinary Employer Support Award from the ESGR for sustained support of employees who serve in the National Guard and Reserve.

–Enterprise also has been named a Top Veteran-Friendly Company by U.S. Veterans Magazine, “Best for Vets: Employers” by the Military Times publishing organization and Most Valuable Employer for Military by CivilianJobs.com