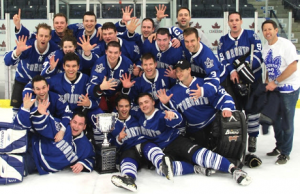 The 12th annual Tony Barone Memorial Cup Tournament has become a tradition that pits Canada’s eight operating groups against each other as they vie for championship bragging rights in this spirited ice hockey tournament.

This year’s event took place in London, Ontario where teams competed in a round robin format with each team playing four games in two days to set up the final game.

Toronto and Southwest Ontario triumphed and advanced to the finals. In front of the tournament’s largest crowd ever, more than 100 players, their families and Enterprise colleagues watched Toronto beat Southwest Ontario 4-2. It was a tight game until Brent T. scored an empty net goal at the end of the third period for Toronto and clinched the victory.

The event concluded Saturday night with over 250 Enterprise Holdings employees — including 160 players — celebrating with a closing night banquet. Beginning this year, recognition was given to the best players from each participating team with the announcement of an All-Star Team.

“The tournament is not only about the competition on the ice but the friendships that are built off the ice,” says Vehicle Acquisition Manager Steve M., who organized this year’s event. “By practicing, playing and celebrating together, we are able to network, share professional successes, and enhance our relationships with coworkers.”

The tournament began in 2002, and was renamed in 2008 to honor Assistant Vice President of Remarketing, Tony Barone, who lost his battle with cancer in 2007.