Supporting those who serve

Selfie with a Soldier 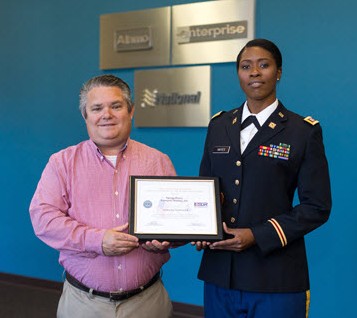 There’s a shiny new plaque on the office wall in Gainesville, Florida – the Patriot Award. While it’s inscribed with Gregg P.’s name, he’s the first to tell you the honor should be shared.

Shared, first, with Verrice H., an Enterprise Recovery Specialist who is also a Captain in the U.S. Army Reserves.

It was Verrice who nominated Gregg, Damage Recovery Manager, to receive the recognition from the Employer Support of the Guard and Reserve (ESGR), a Department of Defense program. It honors the efforts employers make to support citizen warriors through a variety of measures such as flexible work schedules and leaves of absence.

“She’s an amazing employee,” Gregg says, “and an award like this is a great opportunity to recognize someone who does so much for our country.”

Gregg says the award should be shared, too, with Verrice’s co-workers and direct supervisors – all of whom have pitched in to cover the workload when she was deployed or called into military training since joining Enterprise in 2013.

Gregg was honored during a special town hall meeting at the Enterprise office earlier this year. “He was completely surprised,” Verrice smiles. “None of us told him beforehand.”

Over the past several years, Verrice has been mobilized twice – including a 12-month deployment to Afghanistan – and has been called up for extended military training and education courses. Through it all, “everybody has been really supportive,” she says. “They know I have military obligations, and they’re willing to work with me so it doesn’t conflict with my work responsibilities.”

That’s pretty much standard operating procedure, according to Gregg. “It’s just how we work at Enterprise,” he says. “It’s a big part of our culture to support our military – and to be flexible in accommodating employees, whether for military service or other needs.”

Verrice certainly appreciates the backing her co-workers provide. “I think they’re all true patriots,” she says. “If I could give everybody here an award, I would.”