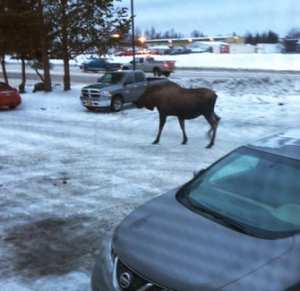 Mention “bear claw” around most Enterprise Rent-A-Car branches in the U.S., and people will probably assume you’re picking up pastries or donuts for a sales call on a local body shop.

Say “bear claw” in Alaska, and there’s a decent chance it means one of your vehicles is about to make a trip into the shop for repairs.

“I have yet to see a bear personally, but I have seen the claw marks a bear left on the side of one of our trucks—right here, on one of our lots in Anchorage,” says April K. Regional Rental Manager for the largest (not to mention wildest and coldest) state in the union.

More often, moose can be a menace. In fact, many of Alaska’s highways have billboards with the latest tally on moose-vehicle collisions. The thousand-pound animals “can really do a number on a car,” April says.

But mostly, it’s the cold, snow and darkness of the Alaskan winter that get your attention. Temperatures average in the teens during December and January (and often dip below zero) in Anchorage—where there’s just 5.5 hours of daylight on the shortest day of the year.

Alaska is, in short, the perfect spot for an Enterprise growth story. “It’s definitely an exciting place to be,” April says. “There’s still tons of opportunity here.” The company’s been in Anchorage since 2004, but recently expanded its footprint by acquiring the National and Alamo franchises in Fairbanks and Juneau; and by opening two Enterprise branches in Fairbanks, all since late 2012.

“We’ve basically doubled our fleet over the past two-and-a-half years,” says April. In addition, the team has learned a thing or two about the unique challenges of keeping that fleet ready to roll when winter is at its fiercest.

At the Fairbanks locations, for example, the evening ritual includes plugging in vehicles to heat the engine block, oil pan and transmission pan. Plug-in rails are a standard feature in the parking stalls (and all around town), because otherwise vehicles simply wouldn’t start after sitting even a few hours in the bitter cold.

Car prep can be an adventure, too. “You have to be careful that the doors and trunk don’t freeze shut after a wash,” says Fairbanks Area Manager Ryan L.

Special customer instructions go along with every rental as well. “You have to prepare people for driving in these conditions,” Ryan says. “Tires tend to get a flat spot if it’s really cold, and that can make it feel like you’re driving a Flintstone car until they warm up—so we try to let them know what to expect.”

Ensuring safety is also a key concern. Many tourists are drawn to attractions like the Dalton Highway, made famous by cable TV shows—but it’s off-limits for Enterprise customers. “People don’t realize that it’s narrow and remote, without a lot of cell service out there,” he says, “so we explain that if something were to happen, they could be stranded for a while.”

The extra steps are worth it though, because they help to enhance the customer’s overall experience. “Taking a trip to Alaska is not something people tend to do every year,” Ryan says. “Often, it’s a once-in-a-lifetime chance to see the auroras in winter or experience the midnight sun in the summer. And because the trip is really important to them, it’s important to us to make sure they have a fantastic visit.”

Tackling a wide range of unusual operating conditions is one critical element of managing the Enterprise growth opportunity in Alaska. Dealing with the state’s remoteness is another. Sheer distance can complicate many big-picture decisions involved with running the business, notes Regional Vice President Matt B.

“Car flow presents a unique challenge,” he says. “It’s very expensive to ship cars to the state, and if you over-order vehicles, there are only so many places you can sell them. So if you’re wrong, it’s painful.”

In addition, being 2,000 miles away from the Group office means Alaska’s employees can’t always count on the personnel infrastructure that their colleagues in the Lower 48 enjoy.

“A lot of us wear multiple hats, doing things that aren’t typical for our titles or roles,” says April. “For example, I take on responsibilities like negotiating vehicle repairs and the business rental marketing function. And the same is true for the whole team: The jobs here tend to give us a much broader range of experience than anywhere else in the country.”

The remoteness also builds a special camaraderie amongst team members. “Our people are all very close,” April says. “It’s almost like a village—we’re always checking in on each other, to make sure everyone’s OK.”

Count Matt among those who admire what Alaska’s employees continue to accomplish under often-demanding circumstances.

“There are plenty of OIA – ‘Only In Alaska’ – stories you could tell, because weird things just happen here,” Matt says. “But our team does a terrific job of overcoming the obstacles. Their mentality is, we’re not going to let snow or cold or being far away from everything affect our ability to do our jobs—which is to provide great customer service and grow our business!”