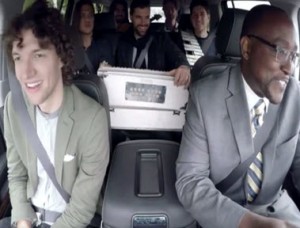 Talk about an incredible way to pick you up: Ken W. could barely believe the special work assignment he had recently – the chance to sing a chart-topping tune along with one of his favorite bands, the Grammy Award winning “for KING & COUNTRY.”

The gig grew out of the company’s sponsorship of “Live In The Vineyard,” a by-invitation-only music festival in California’s Napa Valley spotlighting both emerging artists and some of today’s hottest stars.

“As sponsors, we’re given access to various performers,” explains Yona S., Brand Publicity Director. “We wanted to leverage that opportunity to create interesting content for our fans and followers on social media outlets.”

When the casting call went out to Area Managers in northern California for an employee to be featured in the spot, Ken’s name quickly rose to the top. “I sing all the time,” says the Co-Assistant Manager of the Burlingame branch. “I sing around the office, to perk things up. And if the customer’s OK with it, I sing when I do pick-ups and drop-offs, too.”

It didn’t hurt that Ken is also a fan of “for KING & COUNTRY”: “I’m all for any band that has great lyrical content and a powerful, positive message,” he says.

As for the video shoot, it played out pretty much like any other customer pick-up, except maybe for the six cameras attached at various points throughout the SUV—and the seven band members packed inside.

“They’re really great guys,” Ken says, “and I think it surprised them a bit when I started harmonizing with them on one of their hits, ‘Fix My Eyes.’ It was so awesome, to see how they reacted to my voice blending in with theirs.”

Getting to play a featured role in the company’s promotional strategy—well, that’s just one more thing to love about working at Enterprise, according to Ken. “It’s pretty cool to be able to mix two of the things I’m passionate about—music and Enterprise,” he says. “It was such a great experience. I’m really thankful for the opportunity to be a part of it!”