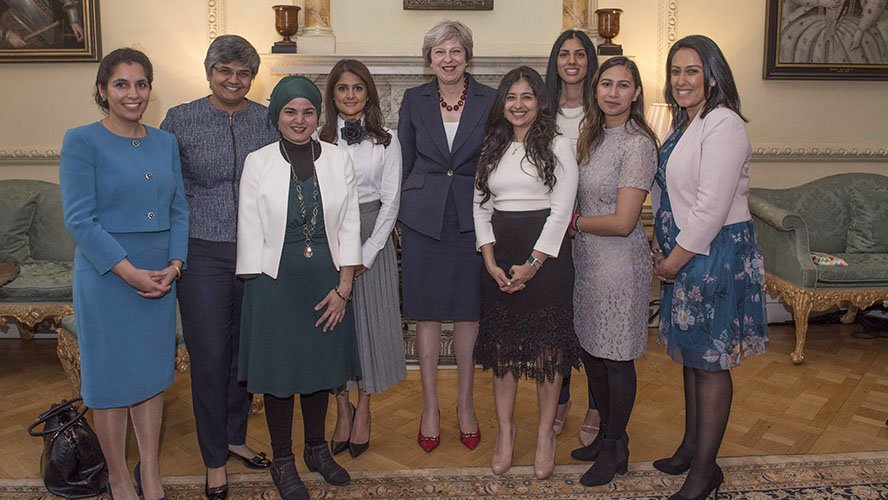 Break enough glass ceilings in the workplace, and you might just find yourself knocking on the door at 10 Downing Street. That’s precisely what happened to Raj D., Talent Acquisition Manager in the U.K. Group. Her win in a prestigious national award program earned Raj an invitation to tea with Theresa May, Prime Minister of the United Kingdom.

The trip to Number 10, which serves as both the Prime Minister’s residence and the headquarters of the U.K. government, capped a year of recognition that “just kept getting better,” Raj says.

Early in 2017, the U.K. Group’s leadership team nominated Raj for the Asian Women of Achievement Awards, which celebrates multiculturalism and the contribution of diverse cultures and talents to U.K. society. “I thought, how could I even do this?” says Raj, who oversees recruitment for London and Southeast England. “All the previous years’ winners had senior manager titles at their companies. And then there’s me: I love my role, and I do a lot, but I was only a specialist at the time and a little intimidated by the program.”

But Raj happens to be very good at what she does – regularly topping the Talent Acquisition sales matrix at Enterprise, along with developing and implementing programs that have helped the company secure a spot on The Times’ Top 50 Employers for Women list 11 years in a row.

After making it to AWA’s short list in the Business category, a mini-celebration broke out among her colleagues. But the work wasn’t over. The next step called for an in-person interview between Raj and the program’s judges.

And the award goes to…

Raj attended the awards gala a few weeks later, already feeling honored to have made it so far. “I was so humbled simply being around individuals who had done so much,” she says.

Hearing her name called as the category winner took the experience to an entirely new level. Her Enterprise colleagues in attendance erupted with joy, and Raj found herself overcome with emotion. “Waterworks, everywhere!” she says. “We had the whole room in tears.”

In praising Raj for being “grounded, immensely talented with heart and passion,” the judges also noted how she is “empowering women and breaking down stereotypes” at Enterprise.

A memorable Wednesday night turned into a “fantastic” Thursday when Raj learned Enterprise CEO Pam Nicholson happened to be in London for meetings. That gave General Manager Bridget L. a chance to introduce Raj to Pam as “the star of the show.”

Amidst all the excitement, a bigger surprise came in October when all the Awards’ category winners received surprise invitations to join the Prime Minister for tea.

“Walking through the house, I just kept admiring everything – the flooring, the main staircase, the portraits of all the Prime Ministers,” she says. “And then to hear, ‘Well done!’ from Prime Minister May herself? It was a once-in-a-lifetime opportunity!”

A prestigious national honor. Personal kudos from the CEO. A congratulatory tea with the Prime Minister. All pretty heady stuff, Raj notes. But none of it compares to the experience of waking up the morning after the gala and seeing the glow on the face of her six-year-old son.

“He’s holding the trophy, going ‘Mum, you won!’” Raj recalls. “It was absolutely the best. It’s when I realized he makes every tough day worth it – just to give him the best future.”