One Word to Describe Enterprise: Support 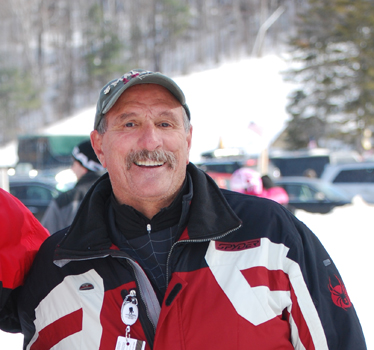 A typical ski trip for a beginner starts off with equipment rental, ski school classes and lots of awkward falls on the bunny hill. Part-Time Driver Tony Santilli went through the same steps on his first ski vacation; only one thing differentiated him from all of the other amateurs on the bunny slope — he did it all on one leg.

Tony was seriously wounded while serving in the U.S. Marine Corps in Vietnam in 1967; his injuries were severe enough to require a leg amputation. When he returned stateside in 1968, he had post-traumatic stress disorder (PTSD) and faced the daily obstacles of living with a physical disability.

One winter weekend, his wife and some friends decided to take a ski trip to get away from it all.

“We went away for the weekend, and I thought to myself, ‘There’s no reason I can’t do this,’” says Tony. “I rented the skis and did what I had to do. From that point on, I fell in love with skiing.”

Tony has a prosthetic leg for walking and when he’s on the job, but skis one-legged. He makes it sound simple, but most skiers with both legs never advance beyond the amateur stage. Tony, meanwhile, went on to become a certified instructor and expert skier.

Over the years, Tony became obsessed with the sport, sometimes skiing 110 to 120 days a year. And he found an added benefit — skiing helped him overcome his PTSD.  The more he skied, the more he wanted to bring the feeling of freedom and movement it gave him to other amputees and disabled veterans.

Tony knew he needed a partner to help him jump-start his vision. His search eventually led him to Ralph Marche, chief of voluntary service at the Boston Veteran’s Administration. The two men established the New England Winter Sports Clinic for Disabled Veterans in January 1998.

“I was the only amputee instructor and taught with another Vietnam veteran,” says Tony. “Twenty years ago, you’d be hard-pressed to find a disabled skier. Some of the resorts wouldn’t even allow disabled people on the mountain because they were afraid of liability. After they spoke to my lawyer, they typically changed their minds.”

What initially began with one clinic and 10 veteran attendees has now grown to 10 to 15 programs and 70 attendees per year. The programs span different regions of New Hampshire and boast about two volunteers for every participant.

Other activities that take place depending on the audience and the season include: sled hockey, sit-down skiing for wheelchair-bound participants, a skiing clinic for female veterans, specialized skiing for blind attendees, kayaking, waterskiing, rifle shooting and biathlon.

The path to Enterprise

Tony spent many years as an employee of the U.S. Veteran’s Administration and after retiring, began a search for a part-time job that would accommodate his love of the slopes.

His nephew, then a Management Trainee, mentioned that Enterprise was hiring for Part-Time Drivers. Tony applied for the position and the rest is history.

After 18 years of hard work with the New England Winter Sports Clinic for Disabled Veterans, Tony and Marche both agree it is time to hand over the reins. Both will retire from the organization this fall.

The timing is appropriate, as Tony is currently recovering from a knee replacement surgery which has put a temporary hold on his skiing activities. Despite the pain from his surgery, Tony speaks with eagerness of the day he’ll return to the slopes.

“I asked my doctor when I would be cleared to ski,” says Tony. “He just laughed and shook his head.”

Despite his doctor’s attitude, Tony remains upbeat. Whether he uses a sit-down ski chair or some other contraption, he knows it’s not a matter of if, but when he’ll return to the mountain.