One Word to Describe Enterprise: Driven

One word to describe Enterprise: Teamwork 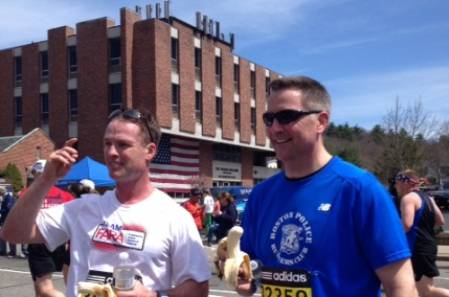 On April 21, nearly 36,000 runners took off from Hopkinton, Massachusetts, for the 118th Boston Marathon. Enterprise Fleet Management Director Chris L. was among them, for his 13th time taking part in the race.

Race officials recognize Chris as an official finisher in last year’s race even though — like so many competitors that day — he did not get to cross the finish line.

Last year Chris was running on Boylston Street about 50 yards from where the second of two pressure cooker bombs exploded, ultimately killing three people and injuring 264 others.

“The first bomb went off right as I turned the corner onto Boylston Street, but I assumed it was just a celebratory blast from a musket for Patriots Day,” Chris recalls. “No one around me thought anything of it, so I kept running toward the finish. Twelve seconds later, I was much closer to the second bomb. I could see the flames shoot out into the street.”

Chris was directed to a medical tent to recover until a police officer came by and said everyone had to move to make way for police cars and emergency vehicles.

“We grabbed everybody,” Chris says. “I walked the five miles to my car in South Boston. I finally got home around 7 p.m. I was exhausted, but it wasn’t from running; it was from all the walking.”

As he has for the past several years, Chris ran last year’s Boston Marathon with Enterprise Fleet Management Senior Account Executive Jeff M.

Jeff was around the corner when the bomb went off. He remembers “chaos in the streets” as the spectators from Boylston Street poured onto Hereford Street.

“I knew the situation was bad when the only traffic was ambulances, police cars and military vehicles,” Jeff says. “Our cell phones didn’t work, so I couldn’t get a hold of Chris until much later that day, but I was fortunate to meet a couple who gave me a ride to South Boston, where I got a ride home.”

Until this year’s race, Chris had not returned to Boylston Street. “It was emotional being back there,” he says. “There wasn’t one stretch where we didn’t see a ton of fans screaming and yelling. All the excitement took the focus off the pain you feel from running 26.2 miles.”

Chris has worked for Fleet Management in Boston for 20 of his 23 years with Enterprise Holdings. “I love what I do and the city I do it in,” he says. “I love getting to know my customers and truly helping them improve their businesses. It’s such rewarding work.”

Jeff is happy with his 4:06 finish and the opportunity to have taken part in “such an amazing redemption day for the great city of Boston.” Chris finished close behind Jeff, clocking in at 4 hours and 15 minutes.

Like Chris, Jeff has spent his entire Enterprise Holdings career in the Boston Group.

“I love what I do and the people I work with,” he says. “Chris is a great manager and an excellent running partner. Boston is our home and these people are our customers and our friends. We ran this race for all of them.”