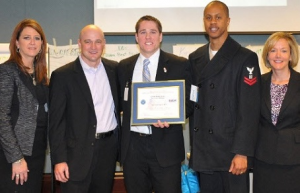 Enterprise Holdings has a rich and distinctive connection to the military through its founder, Jack Taylor, who served as a decorated Hellcat pilot during World War II. Enterprise continues to support service members and their families in a variety of ways.

One of those ways is by accommodating the schedules of reservists like Reservation Sales Representative Rahsaan W., an E5 – Petty Officer – 2nd Class in the Navy Reserve who was on active duty for four years prior to joining the reserve.

Rahsaan nominated his boss, Reservation Team Manager Chad H. for the Employer Support of the Guard and Reserve’s (ESGR) Patriot Award which is presented to supervisors who support their National Guard and Reserve employees. Some of the ways they can do this is by including flexible schedules and time off prior to and after deployment.

“I decided to nominate Chad fortheaward, because he goes above and beyondfor people on his team, and even more so for me,” says Rahsaan. “He is well-deserving of the award.”

Chad began his career with Enterprise in 2010 as a Management Trainee in the St. Louis operations. He underwent a series of promotions before joining the Contact Center in October 2013. In his supervisory rule, he now manages 25 remote employees, including Rahsaan.

“I think it’s great that Rahsaan would recognize me in this way, even more so because of what the award represents,” says Chad.

Rahsaan told Chad about the award in advance, but he kept one thing up his sleeve. “Normally the award would have been mailed to me and no one else at Enterprise would have known about it,” says Chad. “Somehow the certificate was sent to the corporate office instead, and they decided to present it to me with Rahsaan present.”

“We had a group of Contact Center Managers in town for training and thought it would be great to recognize Chad in front of his peers,” says AVP of Talent Acquisition Pam W. “We also wanted Rahsaan to be a part of the award presentation and since he works from home in Greensboro, NC, we flew him to St. Louis for the day.”

“Coming to the corporate offices was great. It really helped me to put my job into perspective and see the other pieces of the puzzle,” says Rahsaan. “The best part was the tour, and seeing the collection of memorabilia in Andy Taylor’s office.”

“Being in the military, I have seen good and bad leadership, and I know a good leader when I see one,” says Rahsaan. “Chad is the kind of person who does the right thing for his people and the company.”