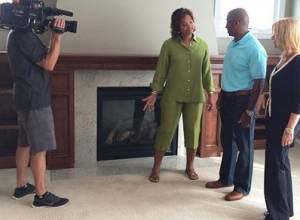 Many people have their list of can’t-miss television shows, but have you ever considered starring in one of your favorite shows? Director of Business Rental Development Rasheen H. recently discovered what it was like to be cast on one of his wife Erinn’s favorite television shows — House Hunters on HGTV. The U.S. show follows people in search of a new home with the assistance of a realtor. Each broadcast features three properties, one of which is selected by the buyer.

Because of a promotion, Rasheen and his family were moving fromTexas to Iowa, and his wife knew someone who knew someone connected to the show. After submitting a five-minute cell phone video audition and speaking with producers, the Hartwell family was cast on the show and filmed their episode. The producers were intrigued by shooting an episode in Iowa, a location that had not previously been featured.

“It was really neat to experience the behind the scenes activity of a TV show with a real director,” says Rasheen. “I have a whole new respect for acting, because it is a lot harder than it looks. Everything is structured; you have to rehearse, and sometimes they might need 10 takes to get it right. It makes for a long day.”

The most difficult aspect of the process was finding childcare for his two sons during filming. “My sons would get bored during the long days and my 2-year-old had more than one meltdown which caused scenes to be cut. We had to rely on coworkers and my boss’ wife to watch the kids. If I had it to do again, I would bring my mom in town to babysit.”

Despite adding stress to the move, filming the show has been rewarding to Rasheen professionally. “Talking about the show has been a good icebreaker for sales calls,” says Rasheen. “The response from people has been amazing. So many people are big fans of the show, and it seems to resonate with them.”

In spite of the five long days of shooting, “Everyone enjoyed the whole experience,” says Rasheen. “It’s been a fun thing to talk about that most people haven’t experienced. I really did it for my wife, and you know what they say, ‘Happy wife, happy life!’