One Word to Describe Enterprise: Inspiring 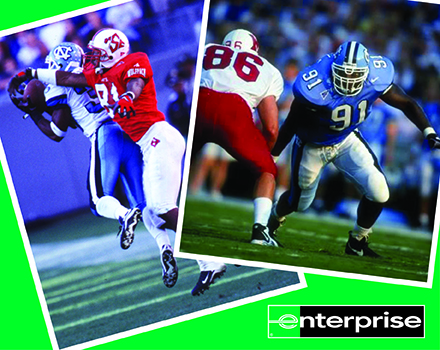 As a senior in high school Assistant Branch Manager Mike P. (on right) earned a full scholarship to play football at the University of North Carolina at Chapel Hill. Former Texas Longhorns Head Coach, Mack B., oversaw the program when Mike first joined the team, and he led the Tar Heels to three bowl games with Mike on the roster.

After graduation in 1999, Mike got drafted in the seventh round by the Detroit Lions. He played for that team and then the San Diego Chargers before an injury prevented Mike from pursuing his professional football career any further.

“I met a lot of great people, and I still keep in touch with a lot of my former teammates at NFL alumni networking events, golf tournaments and charity outings,” Mike says. “Playing professional ball — even briefly — was a blast.”

After his career-ending injury, Mike did some coaching at the high school level in Florida. Though coaching remains a passion of his, he realized it would have to remain a hobby as he pursued a more profitable career path.

“I worked in sales in Florida until about four years ago, when I got married and moved back to North Carolina with my wife,” Mike explains. “Once I got back here, I didn’t see enough growth opportunities so I decided to make another career change.”

Turns out, Mike had played college football with Area Manager Stephen F., pictured on the left. They reconnected, and Stephen convinced Mike to give a career with Enterprise a shot.

Mike and Stephen first met as freshmen at UNC in 1994. After graduation, Stephen attended training camp for the Pittsburgh Steelers and went on to play for the NFL in Europe. He also had brief stints with the Dallas Cowboys and the San Francisco 49ers before moving to Canada, where he played in the Canadian Football League for four seasons. All the while, Stephen maintained his home base in North Carolina, eventually moving back there to start a more stable career with Enterprise.

“After Mike reached out to me, I sat down with him and told him about the company — specifically the founding value that we work hard and we reward hard work,” Stephen recalls. “As athletes, we can really understand that concept. Mike is no stranger to hard work, but I also told him about all the funwe have as well. He was sold. Even though we work in different regions, we’re still very close. I helped him prepare for his interview and his test to become a Management Assistant.”

So far things have gone well for Mike. Six months into his career, he earned a promotion to Assistant Manager. He hopes to manage his own branch in the near future.

“I’m competitive, so I certainly like being on top in the performance rankings,” Mike says. “But coaching is my true passion. Helping my employees succeed is the most rewarding aspect of the job.”

Mike attributes much of his own success to date to the support he has received from Stephen and his own area manager, Ben C., as well as his days on the football field.

“This job requires a great deal of preparation and repetition, just like football,” Mike says. “You have rough days, but you’ve got to fight through them and get better. I try to motivate my colleagues to stay focused and keep their eyes on their goals. Just the other day, I told my co-workers that our bad day was nothing compared to a day at training camp.