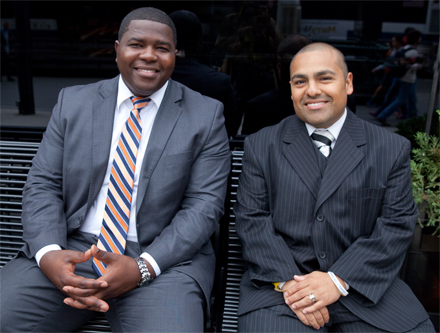 With Enterprise Car Sales’ 2014 Rookie of the Year and Account Executive of the Nation titles both going to employees from the Big Apple, there’s no denying the New York team has found a recipe for success. Here, they share a few of their secret ingredients.

Rookie of the Year

With only 14 months under his belt as a Car Sales employee, Senior Account Executive T.J. technically falls into the rookie category. But given the 176 vehicles he sold in one year, he certainly knows what’s he’s doing.

T.J. was thrilled to be recognized as Car Sales’ Rookie of the Year. “But it’s overwhelming because now I have to live up to it,” he says. “It’s a lot of work, but I’m up for the challenge. I love every minute of this job.”

Since his New Rochelle Car Sales office sits right next to a Daily Rental branch, T.J. had built relationships with the Car Sales team during his time working as a Rental employee. Within a matter of months, he had determined Car Sales offered a great step in his career and made the move.

The ability to build relationships has served T.J. well. “You have to work with your colleagues to help generate qualified leads,” he explains. “That makes it much easier once the customer gets to the office. They feel more inclined to work with you because they’ve received an outside recommendation.”

“New York is one of the largest cities in the world,” T.J. says. “So the market for cars is booming. If we offer the right product, we can turn everyone who wants to buy a car into an Enterprise Car Sales customer. Car Sales is growing and I look forward to seeing what new ground we will break over the next few years.”

Senior Account Executive Pedro C. earned the title of Account Executive of the Nation for the fifth year in a row for selling a whopping 354 vehicles last year. He agrees that the New York car sales market has huge potential.

New York Group Car Sales Manager Jonathan M. attributes the group’s accomplishments to an adherence to the basics and a strong sales culture. “We understand the process and we follow it,” he says. “Our sales team knows if they spend time asking really good questions and getting to know their customers, they’ll better understand what their customers want. People love to make a well-informed decision. It’s our job to help them do that.”

For Pedro, success involves using the phones to his advantage. He never fails to call his customers on their birthdays and takes time to qualify his leads over the phone.

“Pedro is one of the hardest working person in Car Sales,” says Jonathan. “He’s very activity driven and follows his process to the letter. He hates ranking anywhere but in first place. But at the same time, he’s very unassuming and connects with people very well. It’s not surprising at all that he’s once again the best in the country at what he does.”

The future of Car Sales

“Our Car Sales division continues to grow and has a very exciting future,” Jonathan says. “Our owners and senior leaders are investing in Car Sales with new technology, updated facilities and advertising. They expect a strong return on those investments and, in true Enterprise fashion, we will exceed those expectations. There has never been a better time to be in Car Sales.”