Enterprise Heritage: The Eagle Has Landed

One Word to Describe Enterprise: Motivated 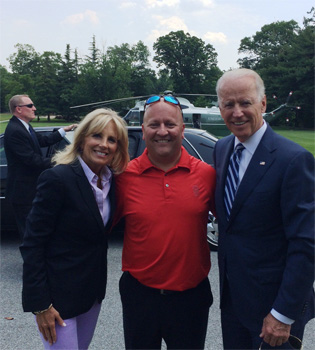 Todd Heavner, Director of Community Relations in Washington, D.C., makes a point of hand-delivering every check he receives from the Enterprise Holdings Foundation for charitable organizations on behalf of his operating group. “When I deliver these checks, something good always seems to happen,” he says.

It was certainly the case on a recent Monday morning.

Todd had a check to hand off to a representative of HEROES Inc., an organization that aids families of local police officers and firefighters who have died in the line of duty. His contact, a Secret Service agent, asked Todd to meet him at the Naval Observatory, whose grounds include the home of the vice president of the United States. The agent let Todd know he might have a chance to snap a picture of Vice President Joe Biden walking to the helicopter pad on the property to depart for a trip.

Dutifully waiting for his photo opportunity from afar, Todd got a shock when Jill Biden waved him over. “Vice President Biden asked me if I would like to take a photo with him and his wife,” Todd says. After the snapshot, Todd’s surprise turned to pride when the vice president called him “a great American” for the financial support Enterprise Holdings provides for HEROES Inc.

“It was a wonderful experience for me, but it was even better to hear the vice president express his personal appreciation for the good things that Enterprise does in the community,” Todd says.

HEROES Inc. is near and dear to the hearts of many in the nation’s capital. Since its founding in 1964, the organization has funded college educations for some of the 224 children of 182 fallen officers and firefighters in that area. The Washington D.C. Group began supporting HEROES five years ago by providing volunteers for the nonprofit’s annual golf fundraiser. Over time, that relationship has grown to the point that Enterprise is one of HEROES’ top five corporate supporters.

“We have at least three employees in Washington who have relatives helped by HEROES,” Todd says. “Our employees take a great deal of pride in what we do with this group.”

Todd, a 28-year Enterprise employee, took on the role of director of community relations just six months ago.

“It’s great the company gives me this opportunity to give back to our local community,” Todd says. “I’m always flabbergasted at the good things that come out of it.”