One Word to Describe Enterprise: Culture 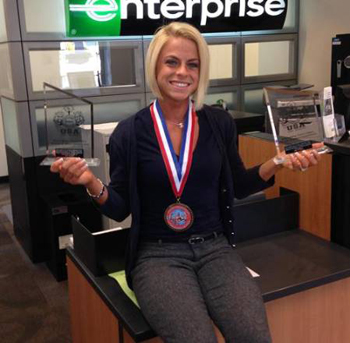 Three years ago, if you had asked Stroudsburg, Pa., Truck Branch Manager Cat Grey what her life would look like today, she never would have guessed she’d have a career at Enterprise while preparing to compete in a national body building competition. But that’s exactly where she’s landed, and she wouldn’t have it any other way.

Cat started her career as an intern in 2011 while she finished up her college degree. Though she did well throughout her internship, Cat intended to pursue other career opportunities after she finished school.

Then she learned about the Commercial Trucks division. She liked the flexibility of the schedule and the opportunities to do outside marketing, so in August 2011, Cat interviewed for a position with Truck and got it.

Dubbed “Mighty Mouse” for her small stature and fearlessness, Cat quickly worked her way up to Assistant Branch Manager. She even signed up for Enterprise’s formal mentoring program, which paired her with Car Sales Manager Brenda Rosado.

“Brenda has taught me so much, the most significant being to write down my goals,” says Cat. “That skill has changed the game for me.”

Brenda helped Cat set three ambitious goals for herself: to earn a perfect customer service score (ESQi), to get promoted to branch manager and to compete in the 2013 National Physique Committee (NPC) NY Grand Prix, a competition held by the largest amateur body building organization in the United States.

Cat’s branch earned a perfect ESQi score for two straight months, and she earned a promotion to Truck Branch Manager. As for the body building competition — Cat not only participated, but she earned first place in her class and qualified to compete in a national competition.

“Cat holds herself to incredibly high standards and takes ownership of her results — good or bad,” Brenda says. “And while body building may not seem to have a lot to do with work, it actually is a wonderful tool for teaching discipline, dedication and resilience.”

Preparing for a competition proved no easy task. “Balancing my new diet and exercise routine with my work schedule took some major adjustments,” Cat says. “I had to start going to bed a lot earlier so I could wake up in time to get to the gym before work.”

A new set of goals

“I’d like to go pro in the next three years,” Cat says. “Training was hard, but I can’t wait to do it all over again. And I couldn’t have done any of it without the Mid-Pennsylvania Truck team. They had my back the entire way. I don’t know another company that gives this much support to their employees both in and out of work.”