Enterprise Heritage: The Eagle Has Landed

One word to describe Enterprise: Teamwork 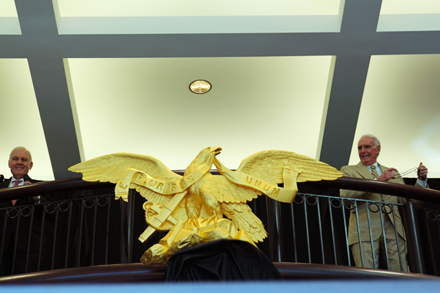 In 1881, a wooden eagle carved by Washington, D.C.-area artist William E. Seward was attached to the USS Enterprise — the fifth U.S. vessel to carry the Enterprise name. One-hundred and thirty-three years later, the eagle has found a new home at the company with the same moniker.

The wooden eagle — with a 77-inch wingspan — now hangs atop the balcony overlooking the main lobby of Enterprise Holdings’ world headquarters.

“We brought the eagle here due to its significance to our company’s military heritage,” says Executive Chairman Andy Taylor, who purchased the wooden eagle and had it repaired and regilded. “My father and our company’s founder, Jack Taylor, flew off the USS Enterprise CV-6 — the seventh vessel to bear the Enterprise name — in World War II.”

Sailing around the world The 19th century USS Enterprise launched on June 13, 1874, at Portsmouth Navy Yard, New Hampshire. The ship sailed on various surveying operations, including at the mouth of the Mississippi, up the Amazon and Madeira Rivers, in the Mediterranean Sea, and off the coast of Brazil.

In 1880, the vessel returned to the Washington Navy Yard and was placed out of commission. During this time, the wooden eagle was attached.

The ship was recommissioned in 1882, and later sailed on a three-year surveying expedition around the world. Her findings on that cruise added materially to scientific understanding of the oceans, their currents and their bottoms. The USS Enterprise continued to travel to various ports globally before serving as a training ship outside the Navy.

A bird in need of attention

The USS Enterprise returned to the Navy in 1909, and the wooden eagle was removed from its stern after the ship was sold as scrap. A.A. Mills salvaged the eagle at Point of Pines off the Massachusetts coast. He later sold the wooden piece to an antiques dealer in 1936.

After years in storage, the eagle was purchased by the Taylor family. Still, the artifact needed much repair.

“We sent it to a conservator, who had to remove more than 100 years of paint buildup,” says Diane Everman, Corporate Archivist. “They then strengthened some weak spots and regilded it to its original look with gold leaf on the front. The gold allowed the eagle to glow on the stern of the ship as it sailed away.”

After the repairs, the eagle came to Enterprise Holdings headquarters in St. Louis, where Jack and Andy unveiled it in a small ceremony.