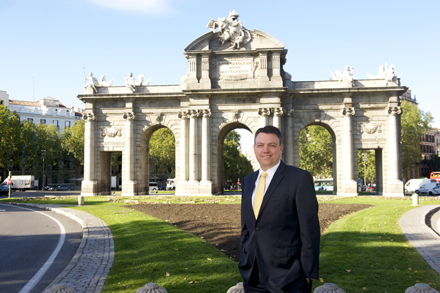 Enterprise operations in Spain are hitting their stride with high marks in customer service and record profitability for the operation.

Of course, rapid progress toward top-tier performance is not an unusual feat for Karsten or the teams he’s led. It’s been his stock-in-trade since joining Enterprise 15 years ago, after graduating from the University of California-Santa Barbara.

Starting off as a Management Trainee in Santa Barbara, CA, Karsten advanced quickly through the ranks during the early years of his career — eventually taking a Regional Account Manager position in 2002, with primary contact responsibilities for the area’s big insurance company accounts.

Still, it was when Karsten got promoted nine months later to Area Manager for Westwood/West Los Angeles that things really started to sizzle. “At the time, the area was a bottom-tier performer,” Karsten recalls. “Within six months, we’d moved into the group’s top five, and went on to frequently rank No. 1 over the next eight to 10 months.”

So what’s the secret for going from worst to first? “The most notable was moving the needle on customer service,” Karsten says. “It all starts with customer service. Also, getting your whole team to perform, and perform consistently.”

Karsten has seen firsthand that everybody benefits when a team hits on all cylinders.

“Because of our performance, I saw a large percentage of my people in the area get promoted. That track record helped me earn the next big promotion in Seattle,” Karsten says. By 2007, he became Regional Vice President and Enterprise Holdings’ youngest Corporate officer.

Karsten’s bilingual skills haven’t hurt, either — especially as the company continues to expand beyond the continental United States. His fluency in Spanish comes from having a father who worked throughout Latin America during Karsten’s childhood.

When named General Manager in Puerto Rico in 2009, Karsten’s fluency provided a distinct advantage, helping him communicate effectively with local officials and employees. The cross-cultural experience in Puerto Rico also proved valuable in preparing Karsten for his current role in Spain.

All in all, his early impressions are overwhelmingly positive.

“Employees here take a lot of pride in what Atesa accomplished over the years, becoming the largest grown-in-Spain rental car company,” says Karsten. “Still, they feel excited about what it can mean to be part of Enterprise going forward. We are in a great position today: We already were the best in Spain at satisfying customers; now we can create that much more separation between Enterprise and the competition.”