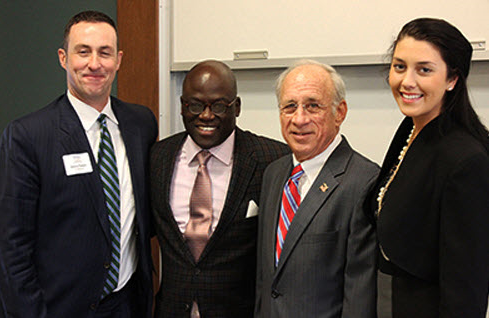 If Enterprise Holdings were ever to offer a traveling internship, Shannon P. would be well versed for the position. With Enterprise internships in the U.S. and the U.K. under her belt, the Webster University student already has a third one planned for this summer.

“I’ve always had a quest for knowledge and a curiosity for how things work,” says Shannon. “I rarely leave an opportunity unturned, and luckily, have found there’s no shortage of them at Enterprise.”

Just months after beginning her initial internship in 2013 with our Loss Control department in St. Louis, Shannon’s networking skills and involvement with a collegiate professional development program helped her score another internship opportunity with Enterprise’s Human Resources team in the U.K. Then, opportunity knocked once more: Following a semester studying international relations and economics in Thailand, Shannon will return to the U.K. to begin the Management Internship program at Heathrow Airport.

But she didn’t become a three-peat intern overnight.

Shannon first learned about Enterprise two years ago while having dinner with her friend’s family. At the time, she had been working at a preschool while attending college, but was in search of a new challenge.

“My friend’s mom works for Enterprise and had great things to say about the business,” Shannon recalls. “She mentioned an internship opportunity in Fleet Management’s Loss Control department, and after doing a little research on my own, it sounded like a perfect fit.”

Not long after that dinner, Shannon was learning the ins and outs of Loss Control. In between handling claim calls, she took part in professional development meetings that Human Resources (HR) offered to interns for a bigger glimpse of the business. At one such meeting, several Enterprise Holdings’ executives shared stories about how they mapped out their own success.

“I was so inspired after hearing a handful of employees talk about how they moved up the corporate ladder that I sent each of them a simple note to say thanks,” says Shannon. “Not only did I receive responses, but I got the opportunity to shadow a few members of the leadership team. Before I knew it, job shadowing one individual often led to an opportunity with another and yet another.”

One of those opportunities Shannon dreamed about was to broaden her horizons overseas. And, once again, things started to fall in place.

“I got accepted into Webster’s Walker Edge,” Shannon says about the program that gives students access to international internships. “Then, as coincidence would have it, Enterprise’s Vice Chairman Don Ross, pictured second from right, was the featured speaker at one of the program’s events, and I got to hear his success story firsthand. Afterwards, the program director introduced me to him and he offered me some great advice as well.”

Shannon’s networking efforts proved successful as Enterprise’s St. Louis Operating Groupestablished on internship overseas through the Walker Edge program. With Shannon’s experience, relationships and initiative, she was offered her second internship with Enterprise.

Leaping over the pond

With all the I’s dotted and T’s crossed, Shannon headed off on her first adventure to the U.K. She wanted to learn another area of the business, so the U.K. Admin team mapped out an internship with Human Resources.

Looking back, Shannon is grateful for the experience. “I discovered that the culture of Enterprise I had grown to know and love in the U.S. was the same in Europe, too,” she explains. “That similarity and the willingness of everyone to help made me feel right at home.”

But regardless of which country she was in or who she worked with, Shannon heard the same piece of advice: “Learn the business from the ground up, and it will take you where you want to go.”

Making good on the best advice

This May, Shannon is following that advice and will return to the U.K. as an intern at Heathrow Airport.

“I’m thrilled that I’ll get the opportunity to learn the business the same way so many Enterprise executives have,” says Shannon. “My goal is that someday, I’ll have the chance to pay all of the support and mentorship I received forward. Years down the road — and definitely after my December 2015 graduation — I hope to be that person giving advice to others’ yearning to build their own successful careers.”