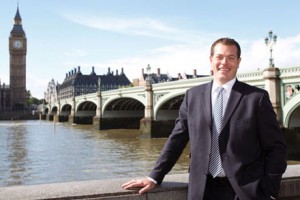 You could say Brendan Keane has made a career out of delivering a little bit more than people expect.

The St. Louis native now lives and works in London, where he is Assistant Vice President of Sales for the U.K. and Ireland. But his career exceeded expectations right from the very start. In 1995, Brendan landed a job as a Car Prep at an Enterprise branch in Springfield, Mo. Initially, he viewed the job as a chance to work his way through college. But soon enough, he caught the branch manager’s eye as someone who had a knack for sales and customer satisfaction.

“I feel like I understood the spirit of the business quite early, in particular what great service meant for the customers,” he recalls. “So I put my head down and did the best I could to make sure I played my part. Pretty soon the manager noticed and asked whether I had thought about a career beyond cleaning cars. That was my last day as a car prep. I went back to my fraternity house, put on a tie and came back to the branch as an intern.”

Things took an intriguing turn for Brendan a couple of years later. His brother invited him to backpack across Europe. Meanwhile, Enterprise had recently started operating in the U.K. — a move that gave Brendan an idea. “I called my old manager and said, ‘I’d like to become Enterprise’s first international intern. How can I make that happen?’” he says with a smile.

He found a way. A summer stint in London provided the funds Brendan needed to accompany his brother on the trip, and pay for his next year of college. Upon Brendan’s return to the States, he continued interning at Enterprise, then joined the Management Training program after graduating early in 1999.

For the next year and a half, Brendan worked his way up through positions at branches in Missouri and Kansas. Then came the call from colleagues he’d met during his summer in the U.K.: We have anopportunity in London if you’d like to come back.

Right from the start, Brendan saw the offer as a challenge and an adventure. Thirteen years later, Brendan and his colleagues have made significant strides. The company now operates just fewer than 400 branches across the U.K., served by a fleet of more than 55,000 vehicles — roughly triple the number Enterprise had there in 2000.

“Enterprise recognizes entrepreneurial spirit in all its employees,” Brendan says. “It’s a place where you can get the mentoring and the leadership to make amazing things happen in a career.”

Brendan’s story is a perfect example that at Enterprise, there is no right career path for everyone. There is only the career path that is right for you. Ready to see where you can GO?