Back from the brink: Enterprise support helps Albertans recover from wildfires

Strengthening our communities: Picking up the pieces 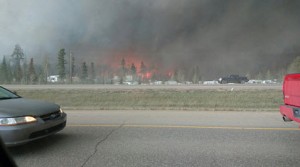 The bright blue skies overhead gave no hint of the devastation that was about to descend on Fort McMurray, Alberta, on the first Tuesday in May.

Locals knew about wildfires burning in the vicinity, but “there was no smoke in the air that morning,” says Will S., Area Manager.  After lunch he stopped by the local Enterprise truck branch which sits up a bit from street level—and when he glanced out the window, Will noticed something ominous: billowing smoke, bearing down on the city.

Turning on the radio, he learned that one of the wildfires had jumped a kilometer closer to the city in the previous hour or two. “Then, out of nowhere, I started seeing flames—just six or seven blocks away,” Will says.

He immediately called the neighborhood branch to alert his colleagues to the swiftly changing conditions. “I said, let’s get everybody out of there—I don’t think we’re in a good situation,” Will recalls. The employees shut down the office and started moving what vehicles they could to the truck branch, further away from the flames.

Driving colleagues back to the neighborhood branch to retrieve their own personal cars, Will realized that the forest just across Highway 63 was now almost fully engulfed in flames. He quickly decided to close Fort Mac’s truck and airport branches, too, and encouraged everyone to meet up with their family members and head out of town.

About the same time, Truck Branch Manager Tracey H. heard from her husband, a paramedic in the local fire department. He and several others had been in a classroom that morning, being trained to fight the wildfires—when the order came to cut the training short so that they could be deployed into action.

“He didn’t have much time to talk,” Tracey says. “He just told me to head home, grab our pet and personal belongings…and go. It was definitely very scary and intense.”

But as it turned out, no one was going anywhere fast. Highway 63—along with virtually every potential exit route from Fort McMurray—had become gridlocked. Stuck on the highway, Will himself came perilously close to disaster.

“Suddenly, the wind picked up and the flames jumped the highway right behind us,” he says. “They engulfed a gas station, and then something blew up as we were driving away. It was unreal—way too close for comfort, and moving way too fast.”

Fortunately, the day’s devastation was limited mostly to property damage but disruption from the wildfires ran deep. Since May 3, tens of thousands have been displaced from their homes in Fort McMurray, with the area’s 30 Enterprise employees among them.

By dawn the next day, Will and Tracey had verified that all their colleagues and family members were safe and accounted for. Soon enough, it also became clear just how amazing the response of the extended “Enterprise family” would be in the wake of the disaster.

At the admin office in Calgary, HR Manager Heather R. quickly put the wheels in motion for a fundraising event – a “casual day” for Enterprise locations in Alberta.  Across the country, several additional Groups joined in.

The result: About $40,000 in Enterprise donations poured into the Red Cross—a figure that was matched by the Canadian Federal and Alberta Provincial governments. In addition, the Enterprise Holdings Foundation announced a $100,000 contribution to the Red Cross the same day.

“The disaster really touched everybody in the Province, because just about everyone knows someone from Fort Mac,” says Lethbridge Branch Manager Lawrence P. His branch is a long way—almost a thousand kilometers—from the fires. But he made it a point to let his Lethbridge colleagues know about the fundraising opportunity. And they showed their solidarity in a big way, stepping up to deliver 100% participation in the challenge, raising about $400 for relief efforts.

Their story is far from unique, and the company’s response extended well beyond financial support. “It was instantaneous,” says Connie C., Area Manager in Calgary. “Within minutes, we were fielding phone calls and emails from Enterprise employees everywhere, wanting to help.”

“Senior management basically said to turn off the retail business in the affected area,” Connie says. “We weren’t going to try to benefit off of someone’s loss. Instead, we started doing whatever we could to make things easy for Fort Mac residents. The priority was to help get them wherever they needed to go, and give them comfort.”

In the days that followed, Enterprise branches in Calgary and surrounding communities began collecting toiletries and personal items—enough to fill an 18-wheel trailer with essentials for the people staying in the emergency shelters up in Edmonton.

Throughout the Province, employees also started welcoming displaced colleagues into their homes—as the Fort Mac team members began taking on temporary work assignments in other cities. In Will’s case, the interim duties even came with a selection of neckties on loan from a co-worker. After all, “you gotta look good when you go back to work,” he smiles.

In short, the wildfires and their aftermath seem to have brought out the best in the company’s spirit and culture. “It just goes to show how strong the Enterprise bonds really are,” says Tracey.”

For his part, Will couldn’t agree more. “We’re blessed to work for a company that emphasizes this culture and makes sure we do the right thing, every time,” he says. “When problems arise, we step up…and in a big way. Enterprise does that in everything. It’s what makes me feel very grateful to work here.”